For runners who come to enjoy a few days in Bilbao, it´s usually strange when they look at the signals: sometimes, they see the names of the streets written in two different ways, or they realise how tx, ts and tz are very usual in those rare words which don´t sound like Spanish language. That´s use to be one of the main questions in most of our tours, so it´s a very useful excuse to talk about Basque language, also known as Euskera. It is an official language in Basque Country, as well as Spanish, and even if it´s not so used, it´s possible to see it on the streets, and if you get your ears ready, you´ll probably hear some Basque too. 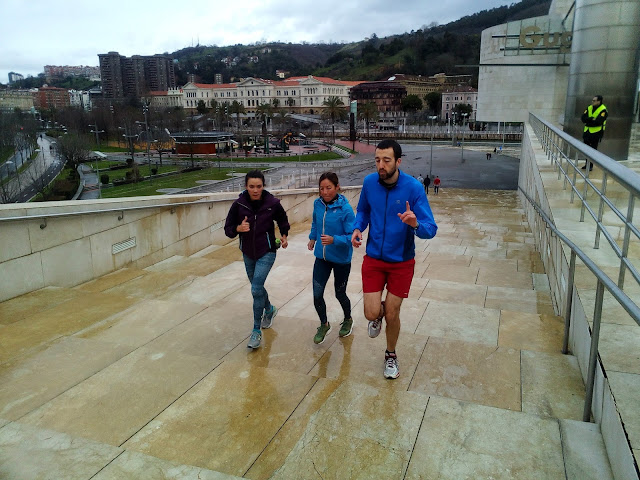 If you wish to learn a bit about of Euskera, this post is not enough long to make you able to say any sentence in Basque, but we´ll let you five main words which you could use during your stay in Bilbao. They´ll allow you being polite in a very Basque way, so pay attention to them, they´re really easy!

Aupa: Its like saying hello, but in a very particular way. It can be said to salute anybody; it doesn´t matter if you tell it to a friend, or to a hiker you meet at the mountains, for example. Moreover, it´s very popular during sport competitions, as supporters use it to send some possitive energy to their favorite teams or athletes; for example, "Aupa Athletic!" in the case of our well-known football team.

Egun on: It´s 8.00 AM. You´re ready to go out of your hotel to visit Bilbao, so when you go through the reception, it´s a good way to salute the receptionist, as it means "good morning".

Kaixo: We could say this is a sinonim of "aupa", but let´s make a small difference; in this case, "kaixo" could be used just before asking for something. Let´s imagine that you go to the Old Town or Casco Viejo, and you go into a bar to take a pintxo. A perfect way to talk to the waiter could be "Kaixo! Could you please...". Anyway, in situations like these you could use "aupa" as well.


Agur: Let´s hold now the explanation about "kaixo". You´ve asked for a pintxo, you´ve already eaten it; it tasted great, but now it´s time to leave and go to other bar, so you pay, and before leaving, you say "agur!". Can you guess what it means? Of course, it´s the way we use in Euskera to say goodbye. Proper pronunciation is not necessary, but if you pronounce it well, maybe someone could think you´re Basque...

Eskerrik asko: These two words are the ones that we use the most with runners who come to know Bilbao while running. It´s great when you trust us to show you our city, when we share our culture with you...so after each and every great tour in Bilbao, we just can say "eskerrik asko!!!". Its pronunciation it´s a bit more complicated, so we´d be happy anyway if you say a big "thanks!!!".

Now, it´s up to you to practice these five words. Just in case you come to Bilbao and if you run with us, it´d be amazing if we meet at the hotel, and the first thing we hear from you is something like "Egun on!".