Since Running Tours Bilbao was born, it has had some changes but one of the few things we still hadn´t seen was a new circuit. But today it´s a special day, and we´re ready to show a new place in our great city. The ciruit is called Bilbao - Ganekogorta and it shows Bilbao from 1000 m. high. This fact gives the chance to see the whole city from a different point of view, but it´s also possible to see lots of kilometres around Bilbao, from the sea to the big mountains in the surroundings of our town. 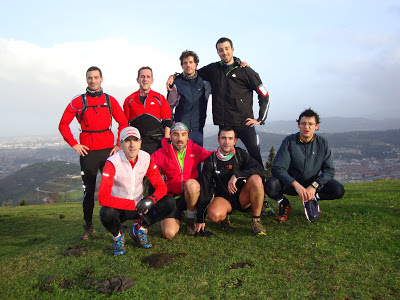 The creation of this new circuit comes from the desire that Sergio and me had since a few months ago. As we started to be trailrunners, we´ve been always running in the same circuits, more or less. Pagasarri and Monte Avril, which are also offered as circuits in Running Tours Bilbao, they have been our most visited moody roads. But we needed something new, and that came last Saturday.

Three brave musketeers came up to achieve a quite hard goal. Our purpose was to ascend to 1000 m. high. We met at 7:30 a.m. and the hard slopes weren´t the worse thing that we found that morning. A heavy rain was weting us since the very first moment. But Sergio, our friend Jose and I started to run up to Pagasarri.

The first kilometres were done in the dark, which made it quite exciting and dangerous for me, as I forgot my front light at home. The water flowed through the road by our side and in 50 minutes we reached Pagasarri.
We kept the good rythm on the top while we took a short break until we got to the slope of Ganekogorta. This was going to be the difficult one, full of mood while the wind hit us on the right side.

Lots of mood stuck in our shoes and it made it more difficult. We did run and walk fast, as wind tried to stop us. The last 200 m. were really hard because of some ice on the road, wind was very hard and we were getting very cold. But finally, we reached the 1000 m. top. There was no time for a picture, because we were about to get frozen and clouds cut off the nice views. So we decided to start running down, and here it came the funniest part of the story.

First I lost my control down the hill, and tried to stop with no success. I used my back as a sled and this made Sergio laugh too much. As much as I did 100 m. further, when he put all his right side into the sticky mood of Ganekogorta. Jose stood up all the way down, until he "sat down" with 300 m. to end the circuit.

This way, we measured the circuit in order to offer it to you! Now, we can say that this circuit is hard, it´s 17 km. long, and views are really beautiful from the top! And in case that clouds cover the sky and it rains, there won´t be great views, but you´ll be part of a great adventure! Come with us and live it!