Today we have run with Ian, from Cape Town, South Africa. In his way from Enlgand to his hometown, Ian read about Bilbao Night Marathon, so he decided to run the half-marathon two days ago, and by the way he could know a bit of Bilbao. 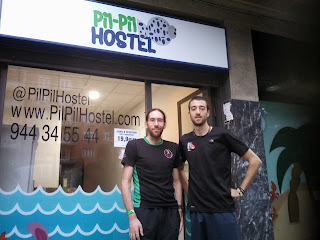 He´s looking forward to run a marathon in Florence, so Saturday´s was a good test for him. He did a 1h 30´ mark, quite better than he expected. As he has told me, races use to be early in the morning, so doing it at night could be very special and he didn´t want to miss the chance.

After 21 km. on Saturday, being tired was not an excuse, and yesterday he booked a tour with us. He wanted to know the Old Town, and so we´ve done. Old Town´s is a very relaxing tour, good to understand how Bilbao was created, and how his expansion happened. Also the mines in Miribilla have caught Ian´s attention during the tour.

At a good pace, we´ve done the tour and then gone back to Pil-Pil hostel. Fortunately, rain has waited until the tour´s been over, so we´ve enjoyed it too much.

Right now while I´m writing these lines, Ian is lots of metres above us flying back home. We wish him a nice trip, and also lots of luck and kilometres!

Thanks Ian, and hope you do it well in Florence! 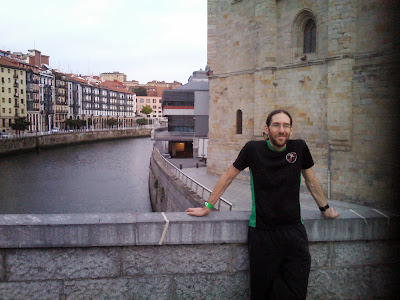