Running tour with Lisa and Niki

Today we´ve had two new runners with us. Lisa and Niki came from Manchester to Donostia, and yesterday they arrived in Bilbao.

Today´s hasn´t been their first running tour. Last year they went to Barcelona, and they ran with Robin from Barcelona Running Tours. And as they liked that experience, they didn´t hesitate when they came to Bilbao. They looked for running tours in Bilbao, and there they found us! 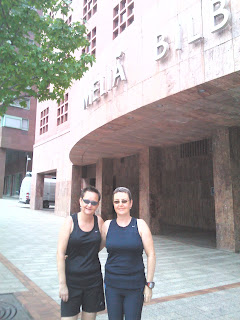 We´ve met at 8.30 a.m.at Meliá Hotel. The day was hot and cloudy, and big humidity has made us sweat since the first moment. Anyway, we´ve run at a good pace. The tour it´s been the one that we call "Bilbao in a Race", so we´ve run through the Main Street, City Hall, Etxebarria Park, the Old Town and in the end we´ve run by the side of the river, where is possible to see Abandoibarra, Guggenheim, and the whole former industry area of Bilbao, which is now one of the symbols of the city.

As we do with every runner that trusts Running Tours Bilbao  , we just can say thanks and feel proud of improving step by step. Lisa and Niki have been really kind since the first step until the last one, telling us about Manchester, giving their point of view about Bilbao and asking every question that they had.

We love running and we love Bilbao, so sharing it is just perfect!