That´s what my mate Sergio and I spoke yesterday morning, planning to run in the afternoon. We wanted to go to a little hill near Bilbao, called Malmasin. And that´s what we did. We knew that it was going to rain in the afternoon, and a big storm was predicted exactly for the time that we were going to be running. No matter what the weather was, it was an unexplored place for us, so we felt wishful to run new paths. And we did so.
But the point in this article is not just about our yesterday´s meeting. It´s about the metaphorical meaning that I found on it. Somehow (open your minds and try to empathize with me please!) it was like the work that we implement in Bilbao. Open Tourism.
Starting from the first paragraph of this post, what I´ve described there is like when you have an idea, and you execute it. It´s all about a new thing you don´t know very well, but you go on with it. There will be trouble ("big storm predicted") but if you´re sure of it and you want to do it, just do it! ("be wishful to run new paths").
As soon as we met, we saw two Canadian girls doing the St. James Way in mountain bike. They were lost, so we told them which the correct way was. We started running, and they followed us very grateful. Then, we left them on the way to the albergue, and we continued our way. It tasted similar to the moment when you help others with their projects, after having got a previous knowledge growing your own one, which has supposed enough experience to be able to help people later on. Or just on the contrary way, when someone helps you contributing with her / his ideas, as sometimes happens in our case.
While running to Malmasin, we talked about some little injuries we´ve had, and how we were trying to fix them. Sergio also told me about some new insoles he bought, which made him feel more comfortable with trail-running shoes over asphalt. I also asked him to look to my legs, because my footfall is pronating, thus I usually get hurt on my left knee. I was not sure of that fact, but now that he told me what I do wrong, I´ll try to work on it´s improvement. So as you see, working close to each other and exchanging advices, helps the team grow. 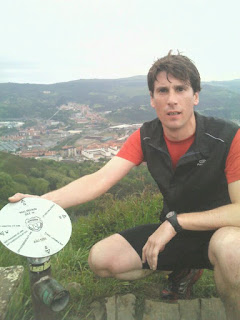 When we started the way up, we had to choose between different roads several times. We knew where the top of the mountain was, which direction we had to follow, and we just runned trusting ourselves. There was a bifurcation where he told me to go right, and he went left. If we got lost, we agreed on shouting and meeting back again. Finally, both ways took as to the same point. Anyway, sometimes is good to work separated if you believe that you´ve chosen the right one, whenever you get sure of keeping communicating with your partner.
And finally we reached the top! That was a very nice moment. We realized that we were at 365 m. high, and we enjoyed beautiful views. But as in Bilbao. Open Tourism, that was not the last goal. From that place, we could see much higher tops. Some of them we´ll reach them, some others...who knows! But for sure that we´ll try to go up there, to higher levels, either running or working, and of course, always with my best mate!

P.S.: I won´t tell nothing about the way back home. Just that I slide off on the way down and put my ass into the grass, but both things are something we don´t ponder in Bilbao. Open Tourism!!!