Don't Be That Awkward Runner II

About three months ago, we talked about some different running-techniques. Don´t Be That Akward Runner was a post where we described different types of runners, and we asked you to think about which group are we included in.

After falling in love with trail-running, I´ve learnt some things about it. I use to analyze myself when I go up to the mountain tops, when I run down the hills, when going through uneven roads...and I´ve realized that there are some peculiar trail-runner techniques:

- Front-crowl swimmer: this kind of runner is usually the one who goes down the hills, moving her / his arms in a showy way, while trying not to fall down. Into the water, those arm-movements would bring her / him the chance to beat Michael Phelps in the Olympics 100 m. final for sure. Joking apart, moving arms this way is really useful not to kiss the floor, while allow you to run at high-speed. 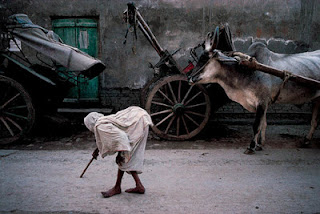 - Bended lady: this kind of runner is always seen on the way up. We all know that one of the good points of trail-running is that walking is allowed, not as in asphalt. So when the way in front of you becomes steep, the best way to keep a good rythm is to put the hands over the knees, and start walking bended, with long strides. We don´t need to use a stick at least!

- Gazelle: Great kind of runner on the way up. Using long strides, he / she´s still able to run even in hard slopes. Little jumps from one rock to another, quick steps...they bring big advantages in a race to this kind of runner. Lucky you if you see one of this kind...I´ve never seen one, and when I´ve tried to run this way, suddenly I´ve suffered a big metamorphosis, from gazelle to bended lady. And never mistake if someone says that you´re" Thompson gazelle", it´s not the same!

- Finally, I would like to say that as we mentioned in the first part of this post, the usually called Zapatones (it means "big shoes") can be seen in trail-running too. She / he appears when running down the hill, front-crowl swimmer "drowns" and arms are not enough to brake, so it´s needed to step really strong not to fall to the hillside. It´s always heard before being seen.

So if you know more types of runners, just tell us, and don´t be ashamed on telling us in which group you are included!