Bilbao is a great city to run inside it. By the side of the river, through his parks…lots of routes to do in a nice urban environment . Anyway, living in a city is frequently stressing, and getting out of it becomes often necessary. And living in Bilbao is a great excuse to get out and meet nature and wild life in the small hills and mountains surrounding the city.

So recently, one of those days that desire for running took me out of my bed full of energy, I decided to get out of the urban pollution and step over grass and mud. The week before, it had snowed almost at sea level, so it was still possible to see some ice on the top of the mountains. The goal that I set for that day was going to Ganekogorta, a 1000 m. high mountain (exactly 997 m.) 9 km. far from my house. I´ve walked that road lots of times, but never runned it. I knew it was going to be hard, so after a strong breakfast, I started to run not very fast. First of all, I had to go all the way up to Pagasarri, a 594 m. high hill, full of trees and some many different birds and mammals living free in his forests. Really nice! While getting to the first summit, tiredness made me think of reaching it and going back home. That was the first great feeling during the ascension, which always flies around my head while running on the mountain: even if I feel like dying, desire makes me keep on running and reaching the goal. (“feel like dying” is just an expression. Listen to your heart, he´ll tell you what you really need).

After a five minutes rest, I kept on running for the first time in my life to a 1000 m. high mountain. An orange mandarin that I ate while resting wasn´t enough fuel for my legs, so after a few steps, I had to stop. Three little stops, until I got back to a good rhythm. But mud, some ice, and wind were trying to shot my down, and I had to stop again. No sensibility in my legs, no blood in my head, no air for my lungs…the most extreme tiredness feeling that I´ve ever had. And while I was thinking on going back home, two young guys walking on the same way as me were talking about me:
-That guy is so tired, he´ll never reach the top. He´d better go home…
-He´s so tired, that´s true. But his effort is something of a great value.
Value. That was the word, that was my strength.The value of my effort, the value of enjoying nature, the value of getting tired to go to the top and get great views in exchange, the value of steping over green and wet grass, the value of getting dirty as a pig on the mud, the value of breathing pure air, the value of all the happiness that I felt from 1000 m. high…The value of a lots-of-feelings-mix. The value of something that words can´t describe. And the value of something that, for sure, you all runners usually feel! 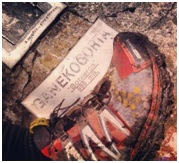 And by the way I´m talking about values, there´s not need to say that the places I´ve described before, Ganekogorta and Pagasarri, are two great values of Bilbao and surroundings. So for all about to come to visit us, don´t forget to fight for those two beautiful goals! And also, for all those summits you plan to get in life!